What Your Organization Needs to Know About Email Blocklists

Spam remains one of the scourges of the Internet, although spam filters do a pretty good job of keeping most of it out of email inboxes. However, those spam filters can cause deliverability problems for organizations that send email for marketing or customer outreach. One way that happens is if the IP address—the unique numeric address of every computer on the Internet—of the server that sends your organization’s email lands on a blocklist.

Blocklist services are conceptually simple. They maintain lists of IP addresses that have been identified as sending spam. Receiving email servers subscribe to those blocklists, and for every connection that’s made, the server checks the blocklist in real-time to see if the incoming message originates from a blocked IP address. If it does, the receiving server rejects the connection, preventing the message from being delivered.

How do sending email servers end up on blocklists? There are several basic ways:

To avoid ending up on a blocklist, make sure you’re being fastidious about your mailing list. Only add people to it if they have legitimately signed up, make it easy for them to remove themselves with an Unsubscribe link at the end of every message, delete bouncing addresses right away, and avoid spammy language in your messages. It’s not hard—just be a good Internet citizen. And, of course, if you control your own mail server, pay special attention to its security to keep hackers out.

Is Your Organization Already on a Blocklist?

Let’s say your IP address has ended up on a blocklist even though you’ve been good. How would you know? You might hear that people who should have received your mailings didn’t or that your messages were marked as spam. Or you might see your deliverability numbers falling in your sending tool. Neither of those is reliable, though, so we recommend you use MXToolbox’s Blacklist Check, where you can type in your hostname or IP address to see if it’s on any of over 100 blocklists.

You can use MXToolbox for quick checks against 100+ blocklists whenever you want, but if you sign up for a free account, you can set up a monitor that checks your email server’s hostname or IP address against 30 common blocklists every week and emails you the results. (MXToolbox offers lots of other email and Internet-related tests that can help you monitor and troubleshoot your Internet presence.)

Getting off a Blocklist

Once your IP address is on a blocklist, your goal is to remove it as quickly as possible. Many blocklists automatically remove entries after a certain amount of time, but clicking the Detail button in the MXToolbox blocklist listing will tell you more about the blocklist and potentially how to request a manual delisting.

The precise steps will vary by blocklist, but the most important thing is that you resolve whatever issue caused your server to be added in the first place. Once that’s done, you’ll probably need to provide the IP address of the server and an explanation of what happened, either in a Web form or in an email to the blocklist admins. 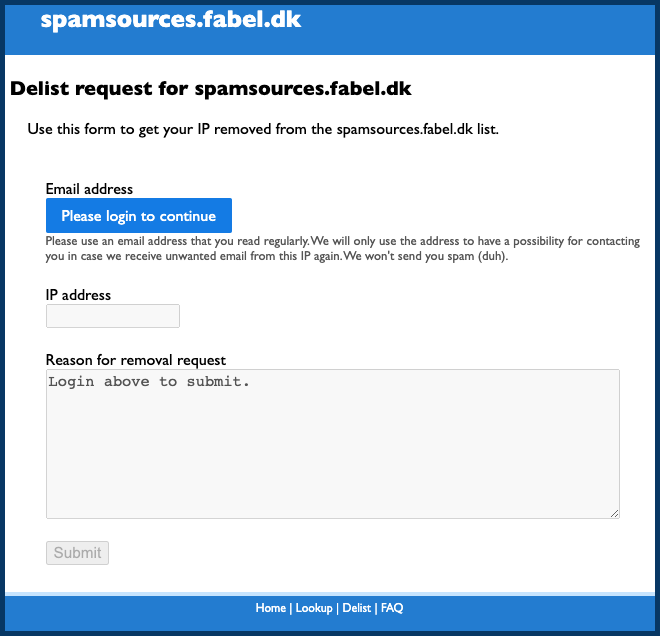 We won’t lie—ending up on a blocklist can be stressful, particularly if your organization relies on sending customer-focused email. But if you keep your list clean and avoid sending spam-like messages, the occasional blocklist listing should be only a temporary blip in your operations.